Characteristics of Sitcoms - That 70s Show

Most TV sitcoms are shot in front of a live audience on a set. The set has three walls and a fourth wall that is non existent where the cameras are set up and the live studio audience watches the show get made. In the studio, the show usually takes place in someones home or apartment. The shows usually take place in the living room where everyone gathers around the TV (which is sometimes not shown and is merely implied that it is there)  and discusses their lives and problems. 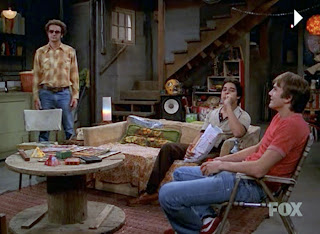 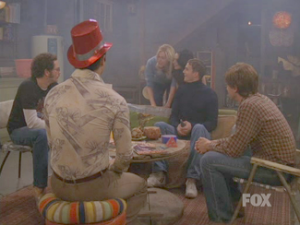 The setting is also where the characters interact with each other. Such as in the show 'That 70s Show', the basement is where the teenagers will either watch TV or sit in a circle and smoke marijuana and discuss their problems with each other. The teenagers also go to a local burger joint called The Hub where they usually sit at the same table and discuss how to solve an issue.

Sitcoms also have a three part structure to them in which a problem occurs in the beginning and during the second part, it is being thought out on how to solve the problem, and finally in the third part the problem is resolved and everyone feels better and learns a lesson. This structure is usually set up in order to make room for commercials. Most sitcoms have an episodic structure in which the problem and solution occur in the same place and everything is back to normal in the next episode.
This is the case in That 70s Show, where the problem usually occurs in the basement and is solved in the basement.
As seen in the episode 'The First Date' from season one, Hyde tries to steal Donna from Eric and they get into an argument, but in the end, Eric and Hyde resolve their issue in the basement smoking, eating, and talking about life.
http://www.youtube.com/watch?v=lSZTBHr0OU4
Posted by Wylie at 11:03 AM